Tales From the American Southwest

Yvon Chouinard, the founder of Patagonia, famously said, “adventure begins when everything goes wrong.” Ok, I’ll admit,— not everything went wrong on this trip. But it did end up completely different than we had expected. Initially, the idea had been to spend most of the week in Grand Staircase Escalante National Monument, and to hop over to Zion National Park in Utah for a few days of desert backpacking. This wasn’t exactly your typical Spring Break spent on the beach sipping Mai Tais.

The story started like this: a friend asked me if I wanted to go to Zion National Park for a week-long backpacking trip. I didn’t know where the park was, and I hadn’t been backpacking before, but I was fresh off my study abroad in Italy and was feeling adventurous… so why not!?

We began the journey with a 14-hour car ride in a Jeep Cherokee which had a middle seat that was wide enough for a 12-year old child at most. My legs fell asleep after under an hour, and I craned my neck perpetually to keep from scratching the ceiling. Let’s just say that after 50 hours in the car over the course of the trip, I was ready to call Jeep’s engineering team.

When we finally arrived at Grand Staircase Escalante, we hiked into the park for our first night under the stars. The sunset that greeted us was stunning. The best part-- we had it all to ourselves.

This place is totally void of visitors. Our group joked that when we ran into someone at the campground that it would be a murderer. It couldn’t just be a coincidence that we were camping at a place called Hell’s Backbone and hiking down into Death Hollow.

It was here that I discovered scampering. If you’ve never run up rocks, you’ve never lived. Climbing, on one hand, is slow. Backpacking is cumbersome with the weight on your back. But bounding up rock formations without a care in the world or a single piece of gear on your shoulders-- now THAT is exhilarating. 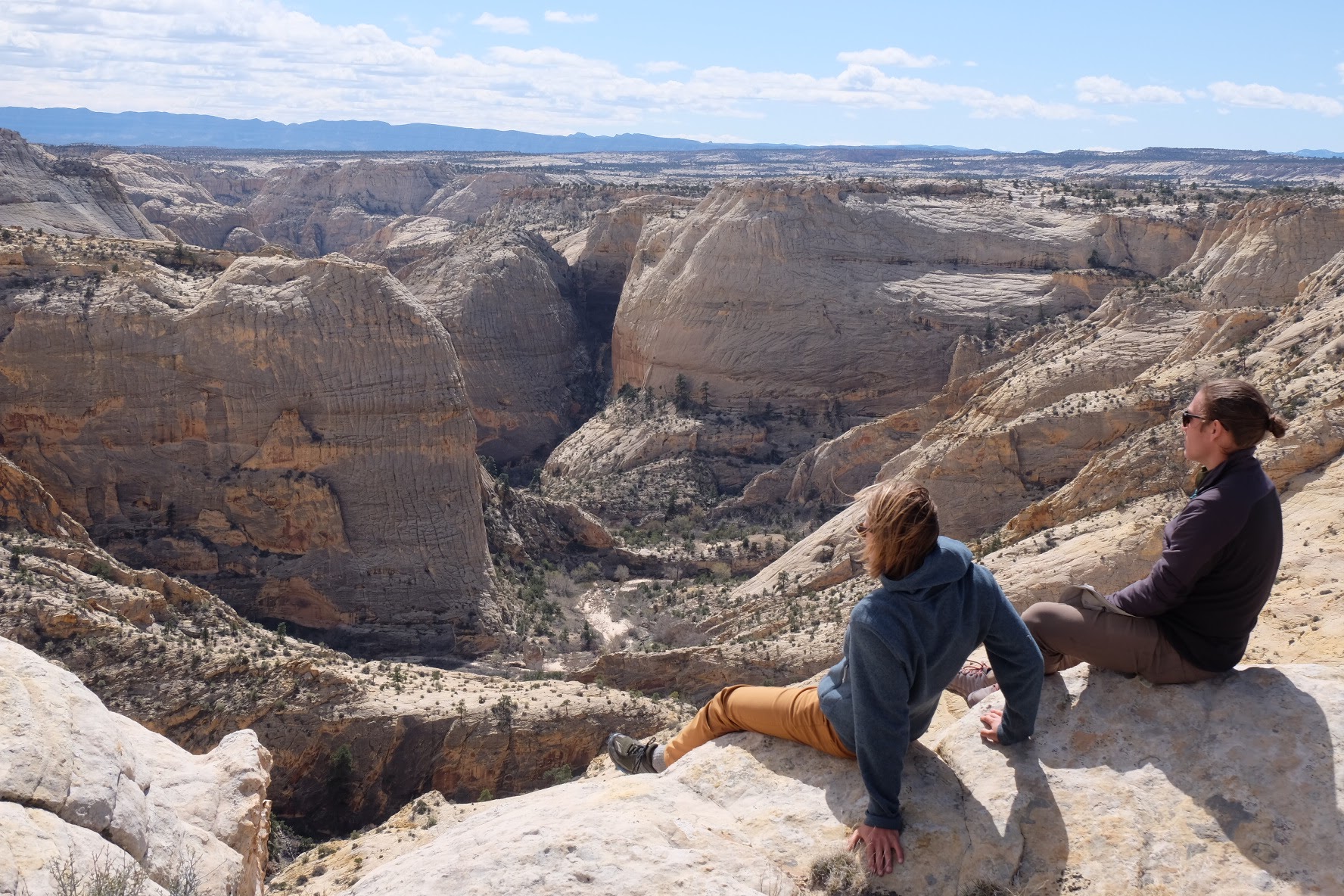 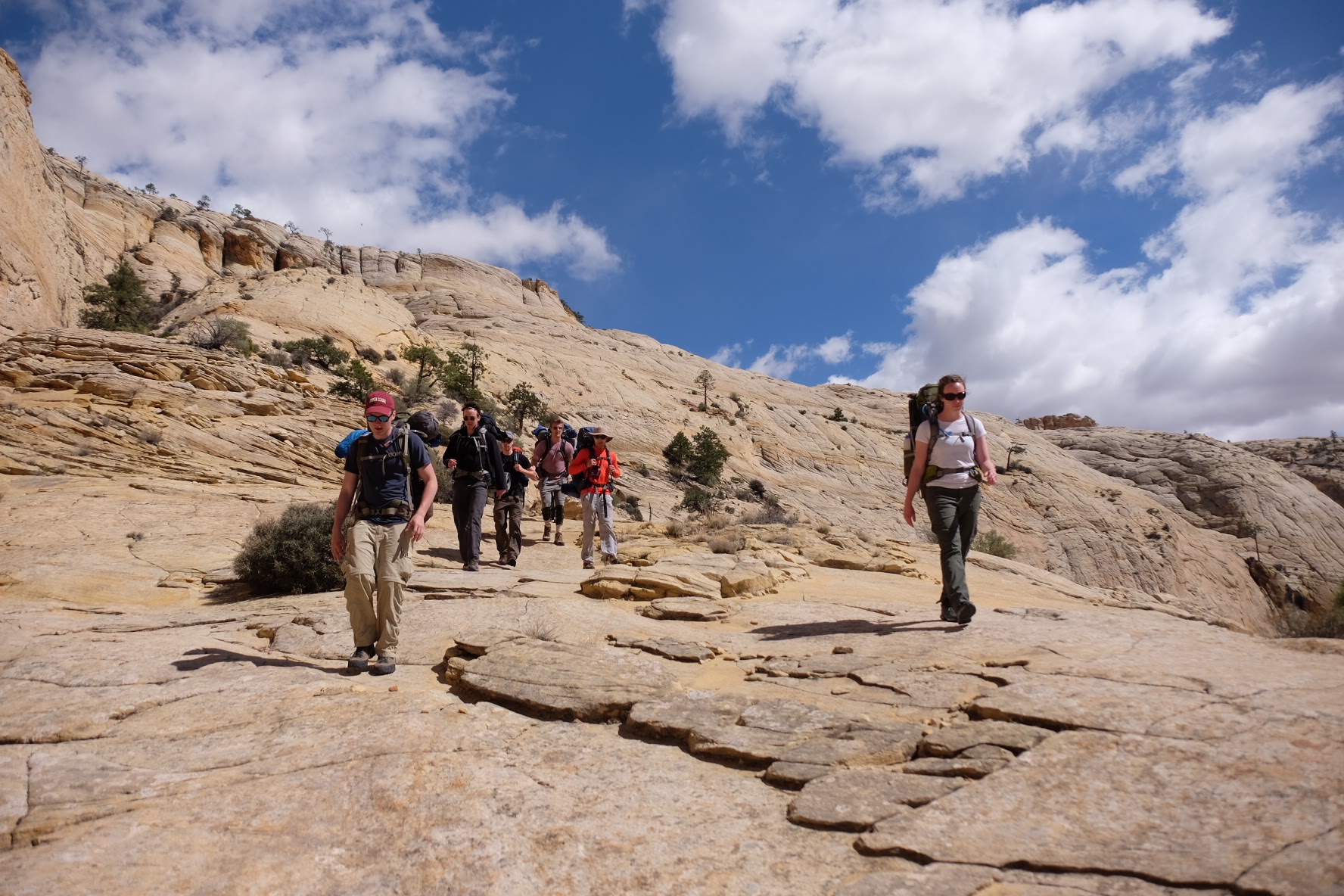 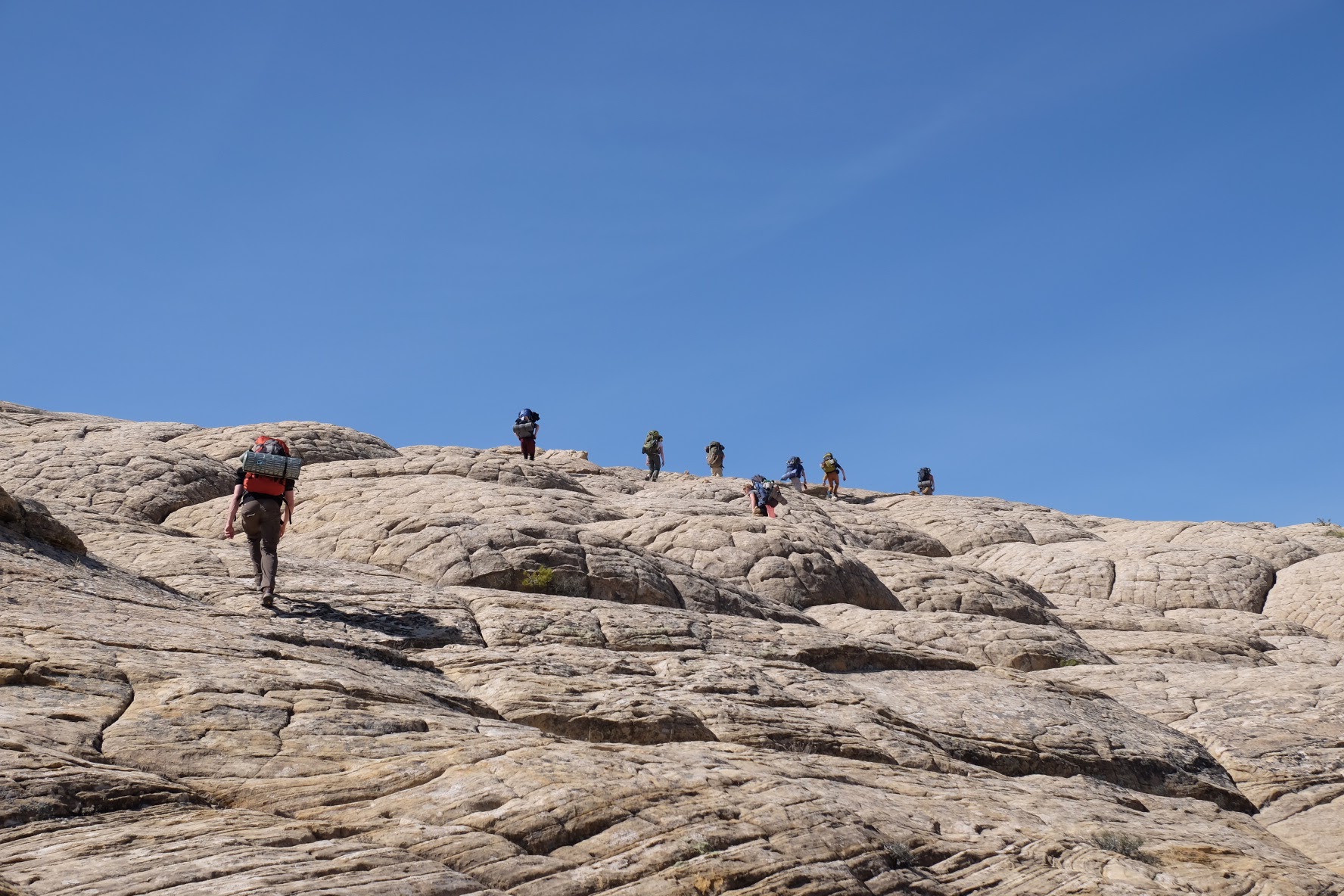 On the 2nd day in Escalante National Monument, we started along the Boulder Mail Trail. The trail led us from the trailhead on Hell’s Backbone down into Death Hollow. I wondered if there was a Lazarus trail. We made our way gradually down into a ravine and waded through a river for the better part of a mile. We aimed to exit the ravine by sunset and find a sandy riverbed where we could camp.

Trudging through the river was refreshing but nerve wracking-- a simple slip could mean a soiled sleeping bag, tent, and rations. It was after about one mile walking in the river that we stopped in a clearing and our trip leaders announced that we had taken a wrong turn. I could see the group members’ spirits plummet. There wasn’t much to be said. The only option was to make the return through the river, at double speed, hoping to find a way out. The sun began to set, and the temperature would soon drop. 30 minutes went by without a word spoken. Finally one of the leaders spotted a pile of rocks adjacent to the river-- a trail marker which had been knocked over, and had made us miss the trail entirely.

A steep, dusty trail led steeply upwards, and we still had about 2 miles until camp. I struggled through every step on the path that seemed to extend at a 45-degree angle from the riverbed. I was the last to take the trail up from the river. But somehow, I soon found myself passing my fellow group members on the steady limestone incline. By the time we reached the highest point, I was the second to arrive. I knew I had undergone a change at this point; I was here in the wild, and I was here to stay. I would probably have more pictures from this section of the trip, but I was simply in a zone of my own that is hard to describe except that I was swept along with it.

Bryce Canyon was our next stop after Escalante. Hoodoos were the hot topic of this leg of the trip. They lay in wait like doorways, lit up in the evening sun as tall columns of orange. These tall rock formations are formed by water freezing and melting every winter for thousands of years, seeping into the cracks of the Limestone and gradually melting them away. We caught the sunrise at Sunrise point and the sunset at sunset point, both on the same day! 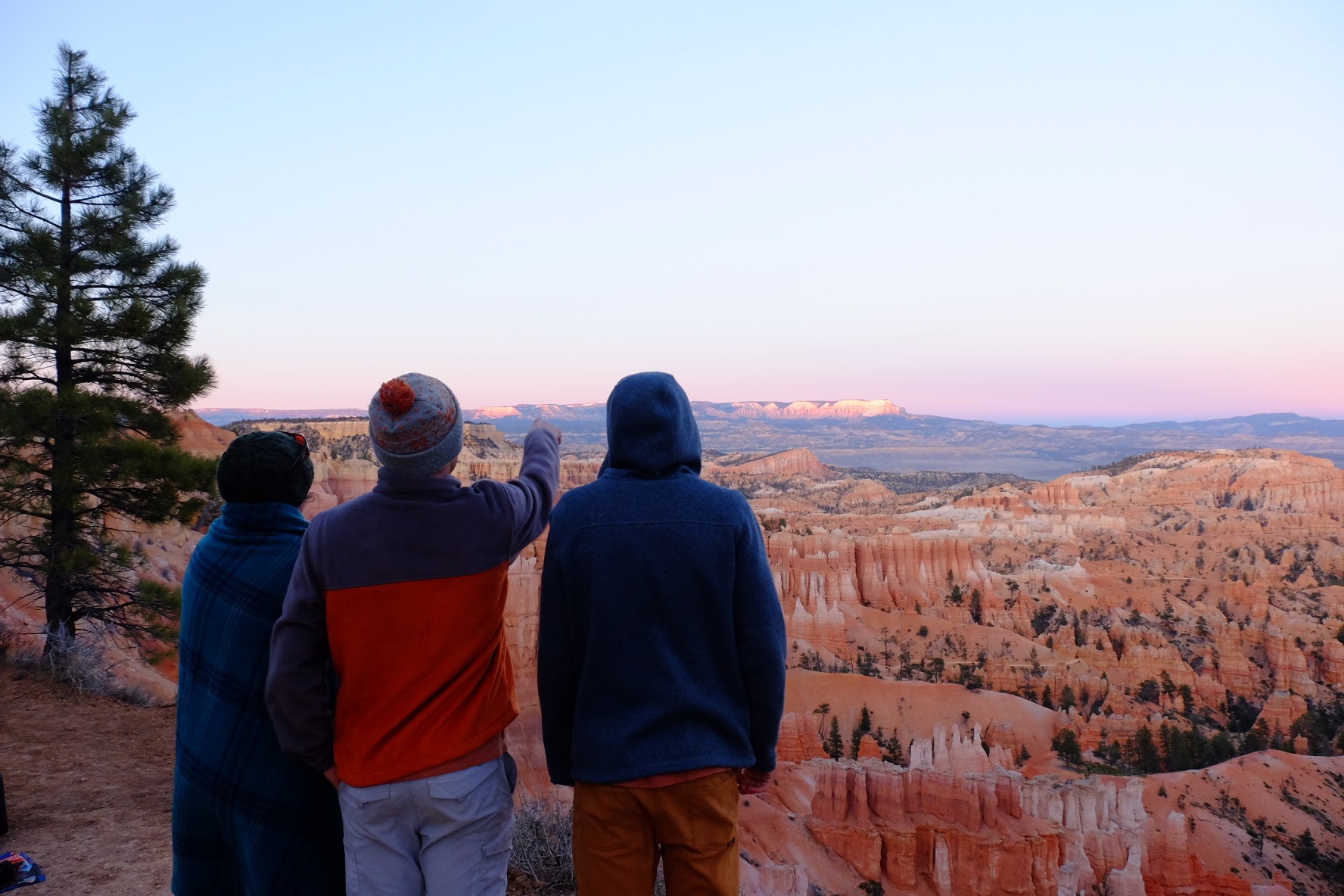 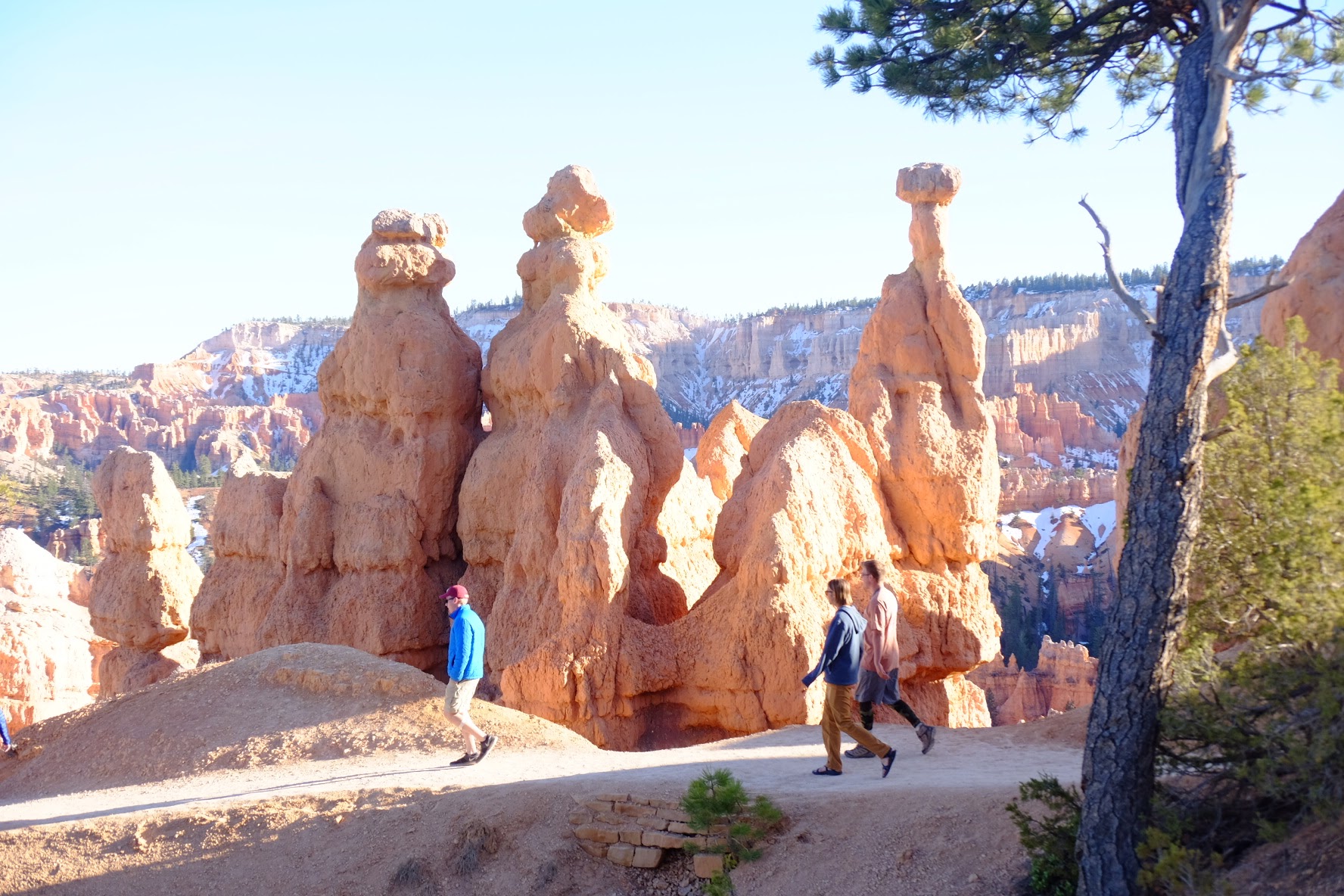 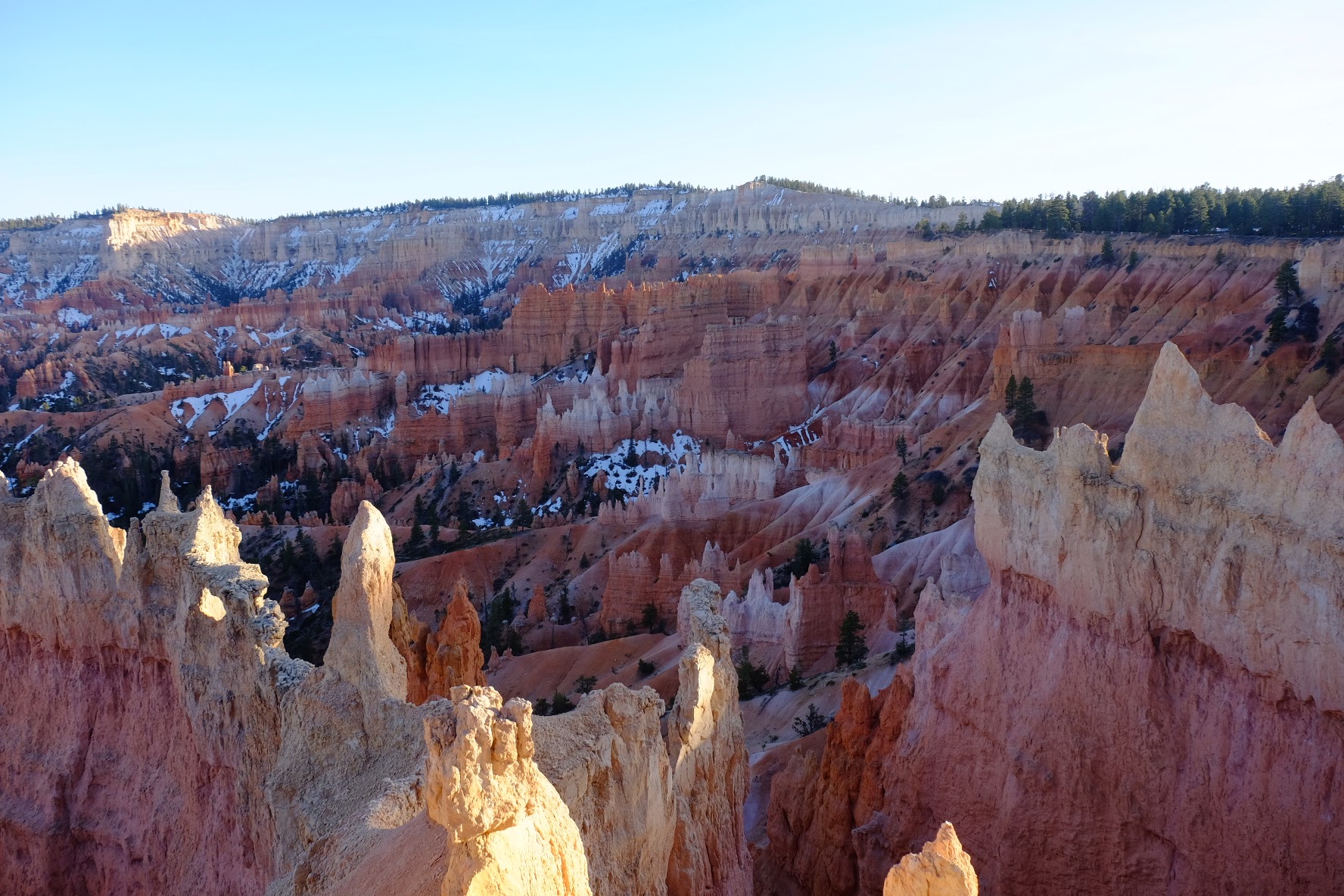 That night, one of the group leaders threw out the idea of stopping at the Grand Canyon. I sensed another change in plans! It was 8 pm, my back ached, and a long day of backpacking had exhausted me to the bone. But the Grand Canyon was only 5 hours away. Why not! We hopped in the cars and drove through the dark, arriving at 1 am.

We set up camp and woke up just 3 hours later to catch the sunrise. I shivered inside my sleeping bag as I squinted at the rising sun. That day, we ventured into the canyon on the South Rim Trail, a much different scene than our Escalante backpacking. Tourists donning designer clothes came by in droves, and entire families meandered down without packs, walking behind hired donkeys. 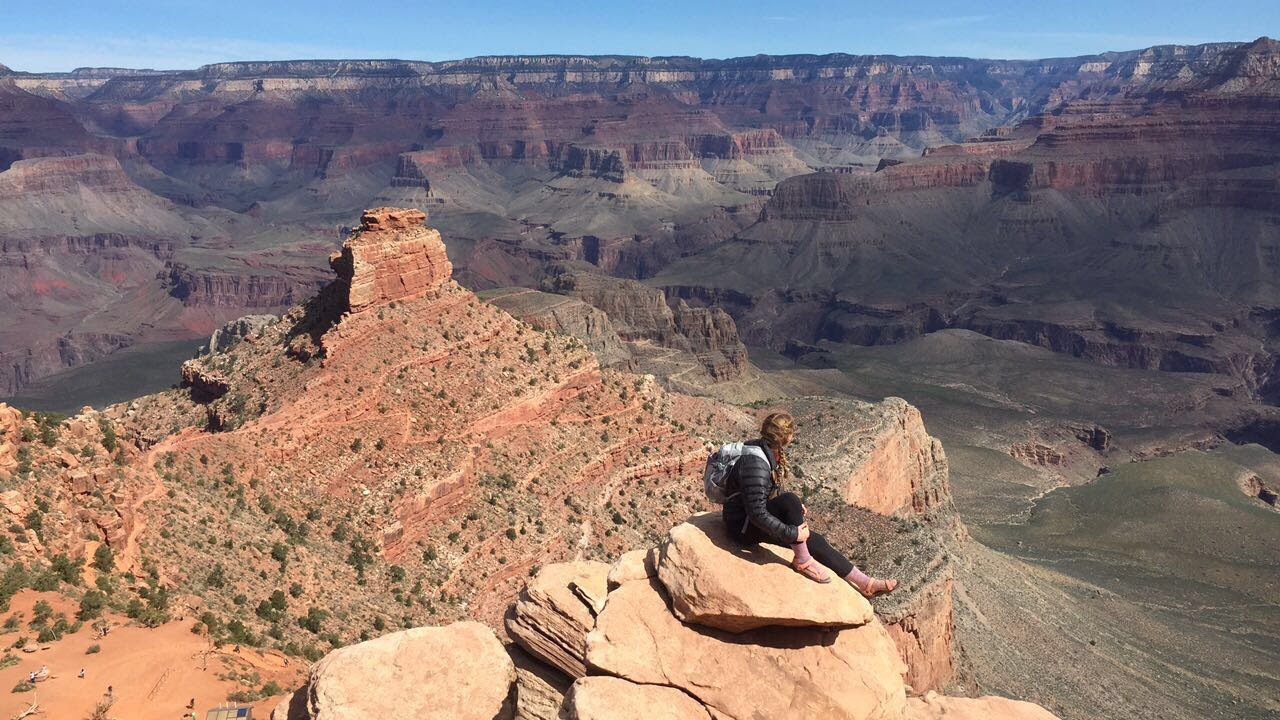 The most extraordinary moment in Zion was the observation point hike. We took the Zion shuttle service to get to the trailhead. Most people think of Angel’s Landing when they think of Zion National Park, but what they don’t realize is that Observation Point looks DOWN on Angel’s Landing.

Clouds and rock seemed to reflect one another, creating a blend of vivid colors and textures. The river snaked through the canyon, and I imagined in that moment what it must have taken to create this valley-- the millennia of carving and chipping away-- the carpenter of the planet slowly sculpting this masterpiece. It was in this moment that I knew why people try to escape from the city and go into the wild. In a city, where the complexion of a cityscape is all manmade, the colors of the environment seem artificial and forced. Out here, the textures, hues and blending of colors seemed pure and natural-- I was now a part of this earthly canvas. 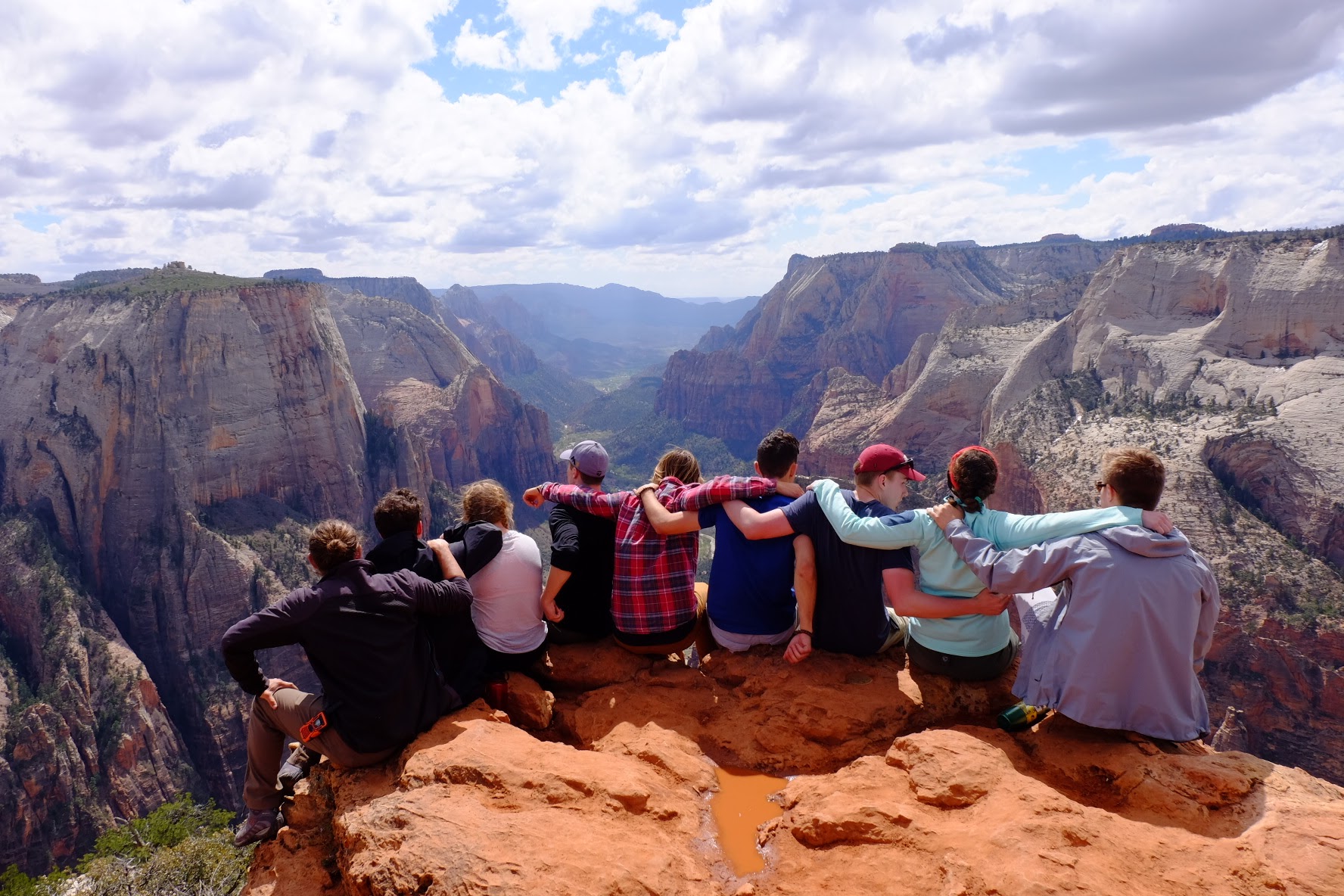 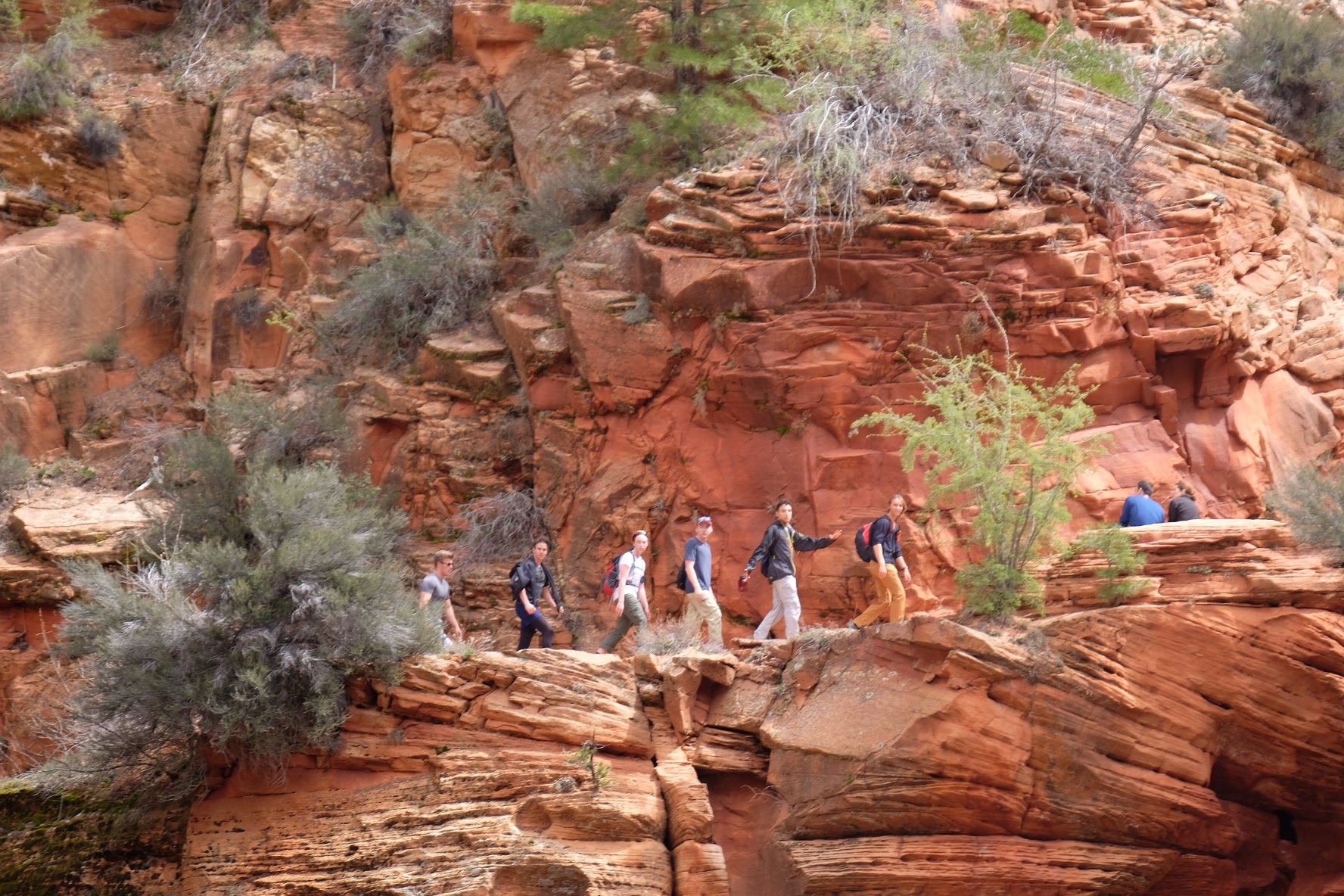 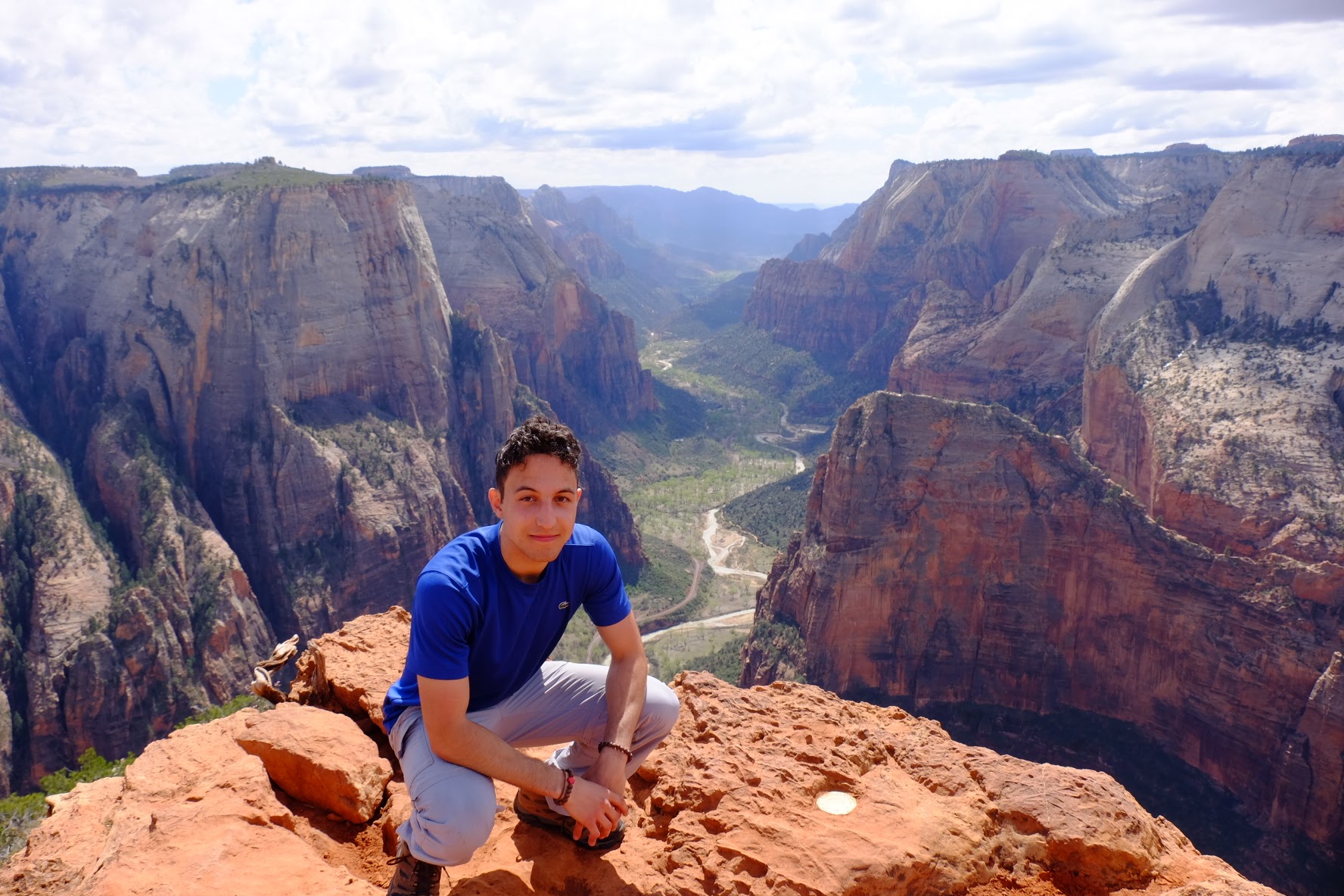 Yet again, on the 14-hour return trip to Santa Clara, we called an audible when a dust storm trapped us in Las Vegas. We abandoned our plans to visit Death Valley. All ten of us settled into a single motel room for the night, munching on our last Mountain House meal packets. We slept on the floor, but it was my best night’s sleep of the week. We woke up early and decided spontaneously to stop in Santa Barbara to close out the trip.

I would finally get my spring break beach day! We spent the day lounging, telling stories, boogie-boarding, and rollerblading on the boardwalk. The leaders of the trip joked that every trip they organized from now on would now end on the beach. 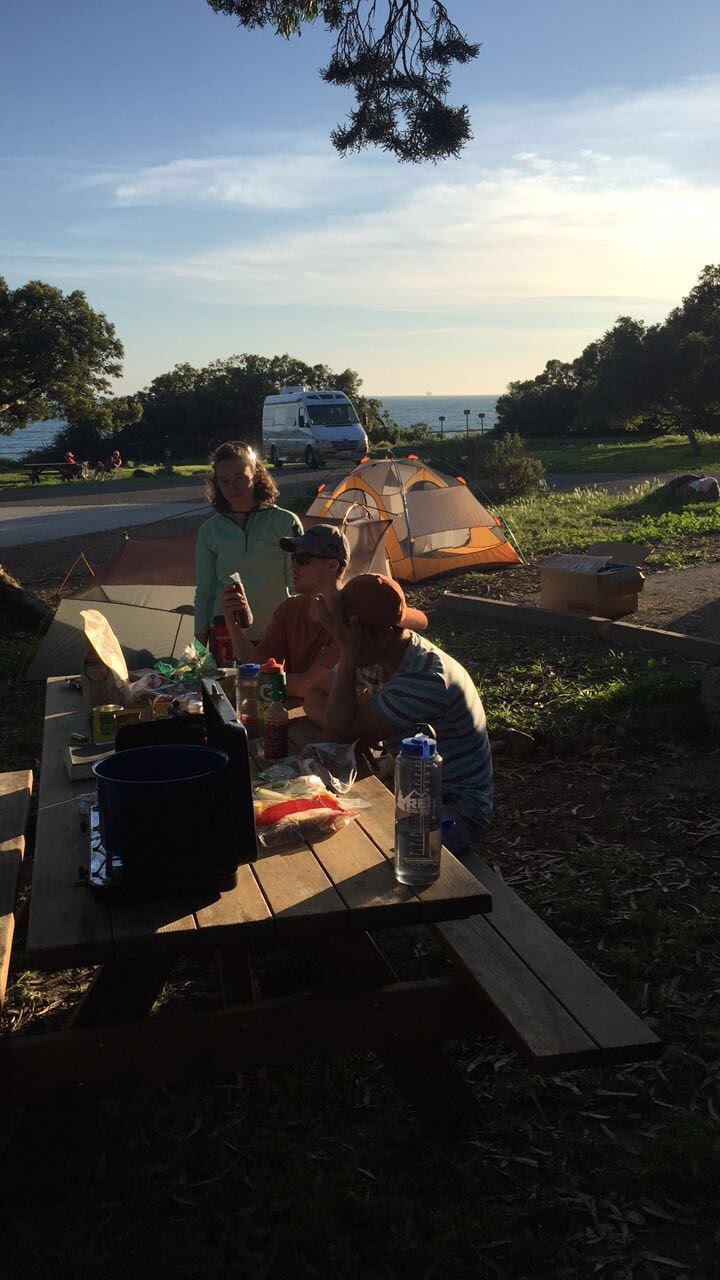 I will leave you with a favorite quote of mine from Yvon Chouinard:

“Going back to a simpler life based on living by sufficiency rather than excess is not a step backward. Rather, returning to a simpler way allows us to regain our dignity, puts us in touch with the land, and makes us value human contact again.”

If you want to read more from our wilderness series, you can find it HERE!

Honest Guides Indonesia: What they don't tell you about Mt. Batur